More Cemeteries in Bratislava (*with update)

Like I've mentioned before, I love old cemeteries. I don't know if this has to do with my obsession with Harold and Maude, or my teenage goth years, or if it's simply because I just like old crap, but I really dig (ha!) old cemeteries. After checking out this cemetery last month, I wanted to see Bratislava's old Jewish cemetery, which is located on the other side of the castle, clinging to a slope of the hillside facing the River Park complex along the Danube. Although I could see it clearly on google maps, actually getting into it proved a bit tricky at first. When we ventured out there, we discovered there are actually two cemeteries right next two each other: the Jewish one, and another, smaller one, for gentiles.

We went into the latter first, as it had an entrance that was, well, obviously an entrance. While not as large and ornate as the other cemetery on Palisady, this was still an interesting and attractive place, especially with its location on the lush, green, sloping hillside. The majority of the names on the headstones appeared to be German/Austrian, and most of its inhabitants seem to have met their fates from around the late 1800s up through the first half of the 1900s. A nice, tranquil place. 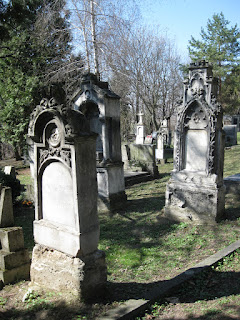 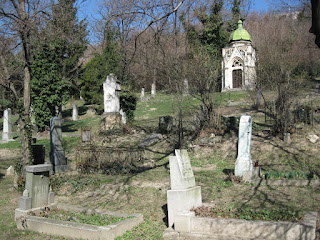 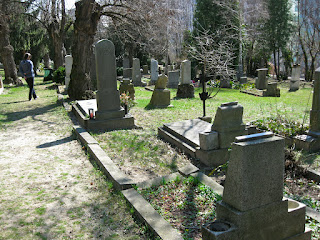 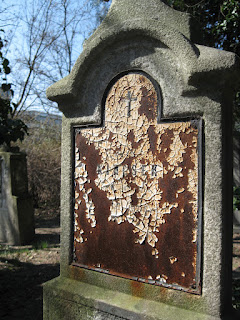 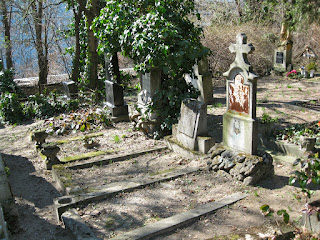 We could see the Jewish cemetery next door when peering over a broken down, weed-strewn fence... 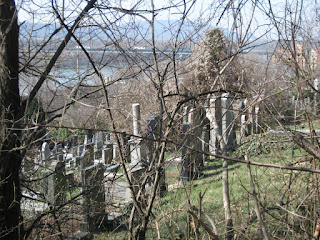 ...but we hadn't noticed any kind of obvious entrance when walking up the road. We left the first cemetery and walked back down the road to what had to be the entrance to the Jewish one. There were no signs, markers, or anything; just a large, imposing iron gate, on the other side of which were some stairs leading up to a small, nondescript building. From the street, all you could see on either side of the gate was a stone wall that had to be about 20 feet tall. One could easily walk by without ever realizing there's a cemetery on the other side.

Assuming the gate was locked, I was thinking we wouldn't be able to get in, until I gently pushed at it and it opened with a sharp screech. So, we went inside, walked up the stone steps, and went through what looked and felt like the patio of someone's backyard. Laundry was drying on a line, and window sills of the concrete bunker-like dwelling were cluttered with the kind of junk that indicates signs of life. A large dog lying in an area totally enclosed by a cyclone fence, looked at us, shrugged his shoulders, and went back to sleep. It felt weird, like we were trespassing, but we passed on through to the cemetery regardless. No one came out from the building to tell us to go away, and we didn't actually see anyone else on the premises.

At any rate, the Jewish cemetery was much more attractive, visually intriguing, and - I'm assuming - older. All of the headstones were inscribed with Hebrew, so we had no idea what any of them said (hence my uncertainly about the age of the place). But things looked considerably older than the first cemetery, what with lots of headstones jutting out of the ground at random, severe angles like gnarly sets of teeth. Some areas looked as if they were no longer being maintained, as they were covered in layers of thick vines of ivy, roots, and weeds. Again, the setting on the side of the hill (the bodies could very well be sliding down the slope in the subsoil!) really lent the place a unique atmosphere. 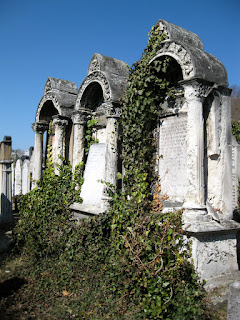 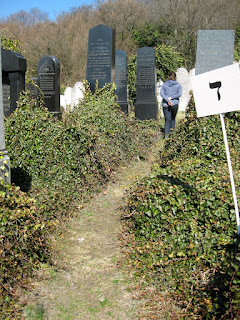 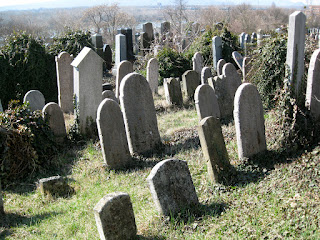 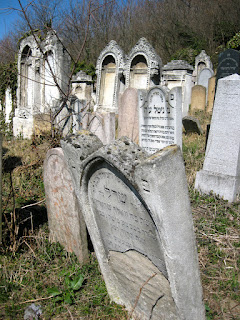 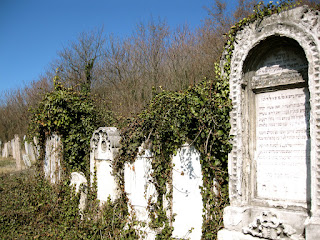 I'm still trying to find some info on the history of this cemetery. I can't seem to locate any information on its age or origins, at least not on-line. I believe it is the only Jewish cemetery in Bratislava, and people are apparently still being buried there today, given how new some of the headstones by the entrance look. Apparently there was a smaller, separate cemetery down the hill from the main one, set along what is now the busy Nabrezie armadneho generala Ludvika Svobodu, next to where the southwestern entrance to the tram tunnel currently sits. Some important and influential local rabbis (notably, one named Moses Sofer) were buried here, and their plots are now housed in an underground mausoleum, which many orthodox Jews consider to be sacred. (I don't know why it is separated from the main cemetery, although perhaps that has something to do with the importance of the people buried here). At any rate, I need to come back here sometime later in the afternoon when the light is nicer, and take some more photographs. 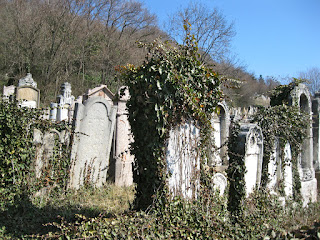 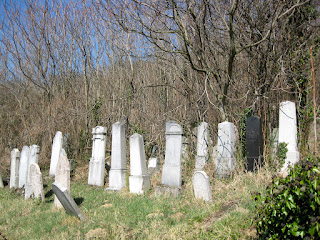 *Update: the weather was lovely Saturday, and after checking out a very cool and insanely crowded public market on Panenska (for which all the hip looking Bratislavans [the likes of which I haven't really seen in all these months here] apparently came out of the woodwork: it felt like we were back at the Lakeshore Farmers' Market in Oakland!), we strolled through the Ondrejsky cemetery, the only one in the Stare Mesto which we had yet to explore. We've walked and ridden past this cemetery gazillions of times, but it just hadn't called out to us like the others had. It's easily the largest, and yet it's the least crowded; there's loads of open real-estate here. A decent amount of its inhabitants died in the 1800s, while most seem to have passed in the first half of the 20th century. One particularly interesting thing we noticed was that this cemetery seems to have the most equal distribution of Austrians, Slovaks, and Hungarians, judging by the names on the headstones, illustrating how multi-ethnic this city used to be. Visually, this place is less striking than the others, but it was interesting to explore, nonetheless. (See photos at the end of this set).